Pension Legislation Could Move in Ohio Senate
STRS Ohio's director of governmental relations Terri Bierdeman reported to the board that Ohio Senate leaders are open to moving pension legislation before its summer break. Senate leaders met with representatives from each of the five public pension systems separately to share this new development and to discuss how best to proceed. The legislators would like pension plan design changes to include a smoother transition to new retirement eligibility rules than what was originally proposed by the systems. Any change in this regard, along with any delay in STRS Ohio's proposed July 1, 2012, implementation date, would cause STRS Ohio's plan to fall outside the 30-year amortization period that has been considered a key element of the system's pension reform plan. The board may consider other benefit changes to balance this cost.

The Senate leaders also called for broad constituent support for the pension reform plan. The retirement systems are developing strategies for communicating the plan design changes to their memberships and how to make it easy for members to show their support for the needed reforms. STRS Ohio will continue to use its website, newsletters and eUPDATE email news service to keep members informed about these upcoming efforts.

Callan projects that the new asset mix could earn a return in excess of 8% over the long term (30-year projection), though in the short term (five to 10 years), the mix is projected to return about 7.6%. Callan reported to the board that if the proposed pension reform plan changes are not implemented in a prompt manner, a more conservative portfolio would be recommended to meet the system's liquidity needs to pay benefits. 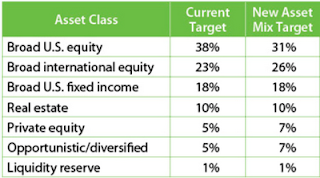 The Retirement Board asked Callan to conduct the asset-liability study in August 2011 to help determine reasonable risk and return expectations. Asset-liability studies are typically conducted every three to five years to acknowledge change and uncertainty in the capital markets and to confirm an investment policy to meet return and risk objectives in relation to funding, accounting and policy goals. STRS Ohio's Investment staff will begin to develop acceptable target ranges for each asset class and will incorporate the newly approved asset mix target in its Investment Plan before implementing the changes.

An experience review is typically conducted every three to five years. In December 2011, the board requested this project so it could have up-to-date analysis as it continues discussion of STRS Ohio's financial condition. The project evaluates the economic and demographic assumptions about future experience that are used to calculate pension liabilities. The actuaries compared what actually happened during the three-year period versus what was expected to happen in the areas of mortality, service retirements, withdrawals, inflation, investment returns, salary growth and payroll growth.

Based on this review, PwC is recommending adjustments to mortality, service retirement, inflation, expected investment returns and salary growth assumptions. The Retirement Board will consider these recommendations at a meeting scheduled for March 2.

Health Care Valuation Shows Improvement in Funding Status
Plan changes to lower subsidy levels and additional savings due to changes in the structure of the prescription drug plan led to an improved financial picture for the Health Care Stabilization Fund as of Jan. 1, 2012. STRS Ohio's actuarial consultant, PricewaterhouseCoopers (PwC), presented the results of the annual actuarial valuation of the fund, showing the projected life of the STRS Ohio Health Care Program now extends to 2039 — an increase of about 15 years from last year's valuation. While the solvency of the health care program improved, the Health Care Stabilization Fund is projected to become insolvent without further changes to the program in the future. Changes in coverage features, program eligibility and/or premium subsidies will be needed.

Costs for the health care program are paid out of the Health Care Stabilization Fund. Currently, monies for the fund come primarily from premiums charged to STRS Ohio retirees and their family members who are enrolled in the program, 1% of payroll from employer contributions, government reimbursements and investment earnings on these funds. The balance in the fund as of Jan. 1, 2012, was $2.96 billion.

In December, the Retirement Board directed STRS Ohio staff to begin working on a strategic plan with the primary goals of establishing Medicare as the health care program's cornerstone, achieving 30 years of solvency by 2016 and extending the forecasted solvency to 65 or more years by 2025.

Fornia said he has interviewed each of the Council members, including the five Ohio retirement system executive directors, and some common elements emerged, including a desire to maintain defined benefit plans, the need to avoid any further risk to employers and a desire to see the health care needs addressed. Fornia plans to continue to collect information from each system and has set up additional meetings with the executive directors.

Council member Seth Morgan challenged Fornia to develop creative, aggressive solutions and present them to the Council in addition to evaluating the current plans before the legislature. Fornia said PTA is trying to balance the need to be able to measure the system's 30-year amortization plans with some Council members' desires for "out-of-the-box" thinking. He said his firm's final report for all five systems should be completed by July 11, 2012.

ORSC Hires New Director
Also at the Feb. 8 meeting, the ORSC hired Bethany Rhodes as the new director for the Council. Rhodes replaces Aristotle Hutras, who retired in December after serving as director for 22 years. Rhodes has been deputy legal counsel for the House Republican Caucus and was formerly an aide to Rep. Lynn Wachtmann (R-Napoleon), a long-time ORSC member who has served as both chair and vice-chair on the Council.
By Kevin Kroskey, CFP, MBA February 27, 2012

Popular posts from this blog

By Kevin Kroskey, CFP, MBA November 02, 2017
Actuarial Valuation Shows COLA Change, Investment Returns Lead to Funding Gains
During the October meeting of the State Teachers Retirement Board, actuarial consultant Segal Consulting presented key findings from its July 1, 2017, annual pension valuation report. This report provides a detailed look at the financial health of the pension fund. The most common ways to express the system’s financial condition are through the funded ratio and the funding period. This year’s valuation report shows the funded ratio — the value of assets compared to actuarial accrued liabilities (benefits earned by members of the system) — improved to 75.1% from 69.6% last year. The funding period — the amount of time needed to pay off the system’s unfunded liability under current assumptions and benefit levels — also improved, decreasing to 18.4 years from 26.6 last year. Segal shared that without the board’s action to reduce cost-of-living increases granted on or after July 1, 2017, to 0%, STRS Ohio’s fun…
Read more

At the June meeting of the State Teachers Retirement Board, the board approved 2018 premiums for all plans offered through the STRS Ohio Health Care Program. A complete list of these premiums is posted on the system’s website, or can be obtained by calling STRS Ohio’s Member Services Center toll-free at 888‑227‑7877. Additional information about the 2018 Health Care Program will be provided in upcoming newsletters and on the STRS Ohio website. In late October, all plan enrollees will receive personalized health care plan information in preparation for the fall open-enrollment period that extends from Nov. 1‑21, 2017.

At the December meeting of the State Teachers Retirement Board, CliftonLarsonAllen reported the results of its audit of the STRS Ohio financial statements for the fiscal year ending June 30, 2017. The report showed that the retirement system’s financial statements were fairly stated in accordance with generally accepted accounting principles and that no material weaknesses in internal controls or instances of noncompliance were found. As a result, STRS Ohio received an unmodified opinion — also known as a “clean” opinion — which is the highest level of opinion that an organization can achieve.

STRS Ohio’s financial statements are included in the 2017 Comprehensive Annual Financial Report, which will be posted on the system’s website by Dec. 29, 2017. In addition to the financial statements, the report includes investment, actuarial and statistical information about STRS Ohio. This report c…
Read more